Following our Habitat Survey in 2010 it was identified that it would beneficial to create a Wildlife Trail for Glaslough village as we had never had one and this would be a great benefit for residents, tourist and visitors to the village and also a great way of informing people of the wildlife and natural amenities that exist in the village. The committee Glaslough Wildlife Trail was designed in 2012 by Ms Catriona Mc Cabe who consulted with Mrs Kay Macklin. Catriona Mc Cabe from Green Bee Education was introduced to the committee by Monaghan County Council in early 2011 and was commissioned to design the signs for the trail.   info@greenbeeeducation.com.  Mrs Kay Macklin was also consulted with by members of the tidy towns committee with regard to the trail data. In 2012 the first eight signs were erected in the locations outlined in the map above and the remaining two signs have just been completed in March 2013.  These include The Old Oak tree and the station gates and the Wetlands on the Caledon Road.  The signs are also fitted with a barcode reader which is situated on the top right of the sign.  This reader when scanned by a mobile phone will bring the reader straight to this website where further information will be available on the particular subject. 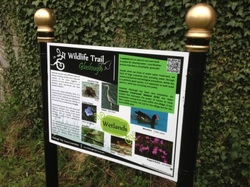 To assist this wildlife trail it was necessary to install wildlife trail signs to follow whilst doing the trail. Members of the community employment scheme and tidy towns volunteers constructed and installed these signs. The signs were also fitted with barcodes so to be used with mobile phones.
Brochures were also designed for the trail.  See below.

Create your own unique website with customizable templates.
Here are the instructions for implementing Google Analytics on our website. For more information, see http://code.google.com/apis/analytics/docs/tracking/asyncTracking.html Copy the following code, then paste it onto every page you want to track immediately before the closing tag. Thank you for your assistance!